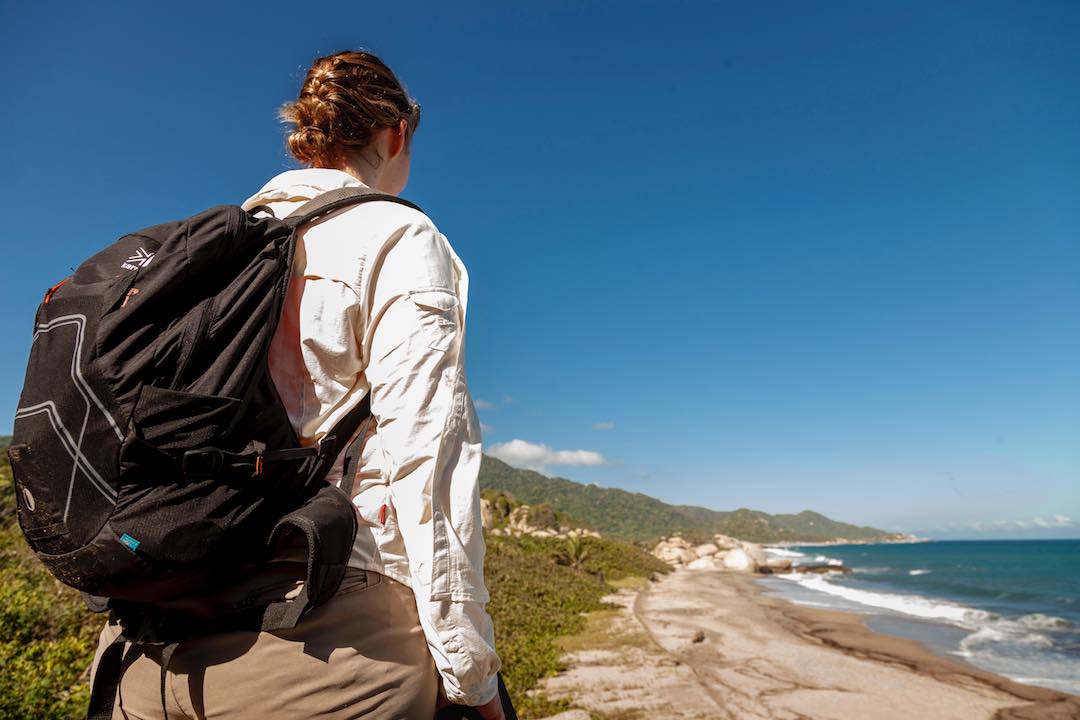 Colombia’s Most Epic Journeys on Foot

Just 20 years ago exploring the rural corners of Colombia’s beautiful national parks and isolated communities was a wasted effort. A good way to invite mugging or worse.

But times have changed. Colombia is thriving. A safe travel destination inviting outdoorsmen and women bent on exploring their diverse landscape. There are 58 protected regions in Colombia. All covered in boundless stretches of scenic hiking trails and mountains to summit.

For too long Peru and Chile have stolen the spotlight when it comes to trekking. Patagonia and Machu Picchu being the hiking meccas they are. But Colombia cannot be discounted. Few countries can offer you hikes along sandy beaches, up snow-capped mountains, summiting active volcanos, across rolling green hills, and into the depths of the Amazon rainforest.

Here are some things to consider before you grab your hiking boots and tackle the best hikes in Colombia. 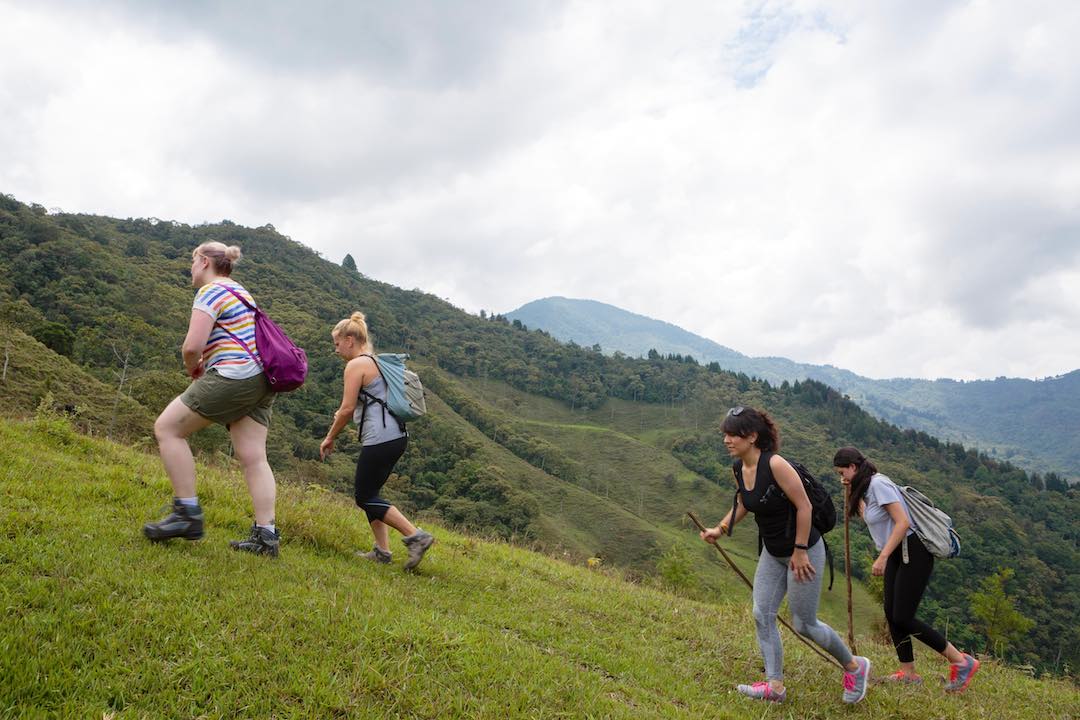 The climate in Colombia is fairly consistent. Cities such as Medellin even have the blessing of a seemingly year-round Spring. But technically speaking Colombia does have a rainy/cool season and a dry/hot season.

The rainy season is April-May & October-November. For most hikes, this is the less desirable time to visit. More equipment will be necessary, certain treks will be longer and more difficult, and some can be impassable in the rain.

The plus side? Trails will be less crowded and the rain can be a welcome relief from the sweltering heat. 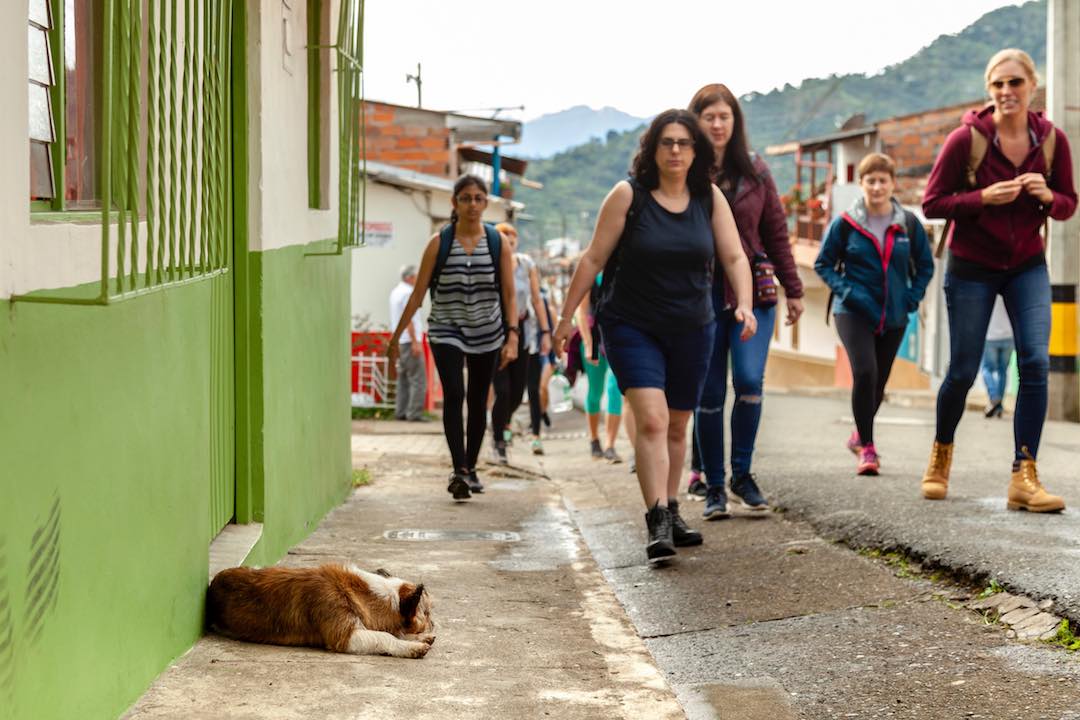 Altitude sickness is a real concern in Colombia. Towering mountain peaks reaching 18,000 ft and even major cities like Bogota sitting at nearly 10,000 ft will make your head spin. Literally.

When your body is sitting at anywhere above 6,000 ft there is less oxygen present in the air, which means less oxygen is reaching your body tissues. The higher your altitude the less oxygen is available. You can begin to experience lightheadedness, headaches, nausea, and extreme fatigue. Altitude sickness can be deadly. If symptoms persist or worsen the only solution is getting to a lower altitude immediately.

Here are some tips to avoid altitude sickness while hiking in Colombia.

For many hikes throughout Colombia, a guide will not be necessary. Signs are posted and trails are fairly easy to follow. When visiting certain protected areas such as “The Lost City” however, a local guide may be required. Check the regulations. 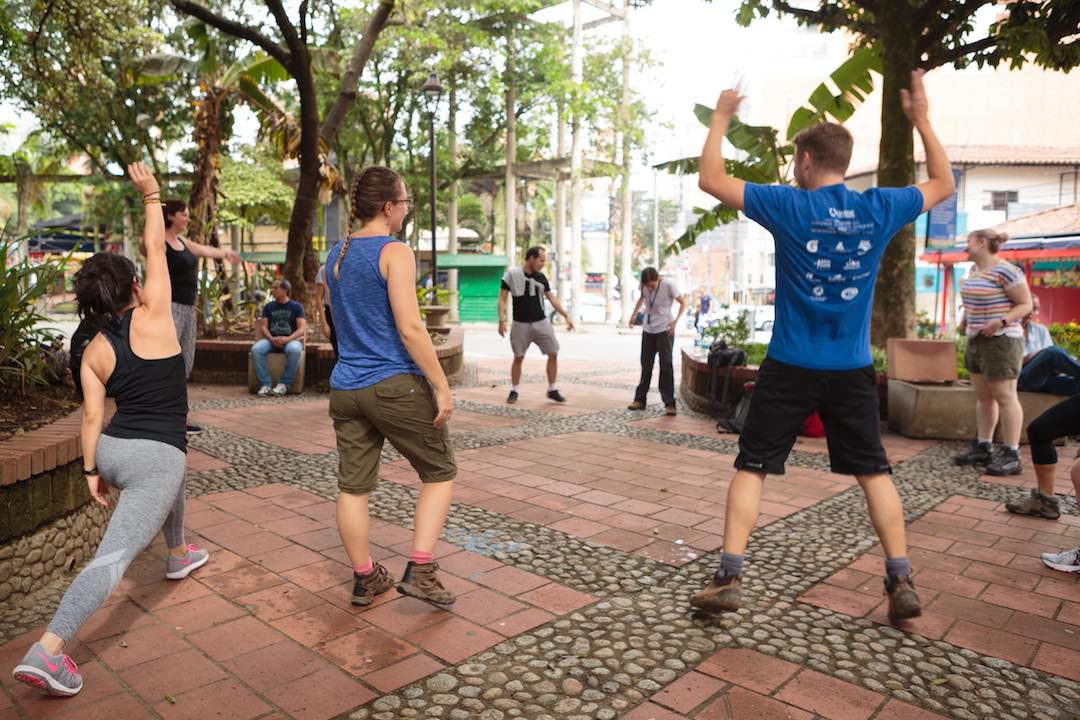 Is It Safe For Solo Female Travellers?

Colombia, in general, has become a safe and welcoming atmosphere for solo travelers of all kinds. With a general sense of awareness of your surroundings and some common sense, you can visit all remote regions of the country with little concern. If you’re worried about hiking alone consider linking up with others in your hostel or joining a group tour.

Here’s our guide to Colombia’s most impressive journeys on foot. 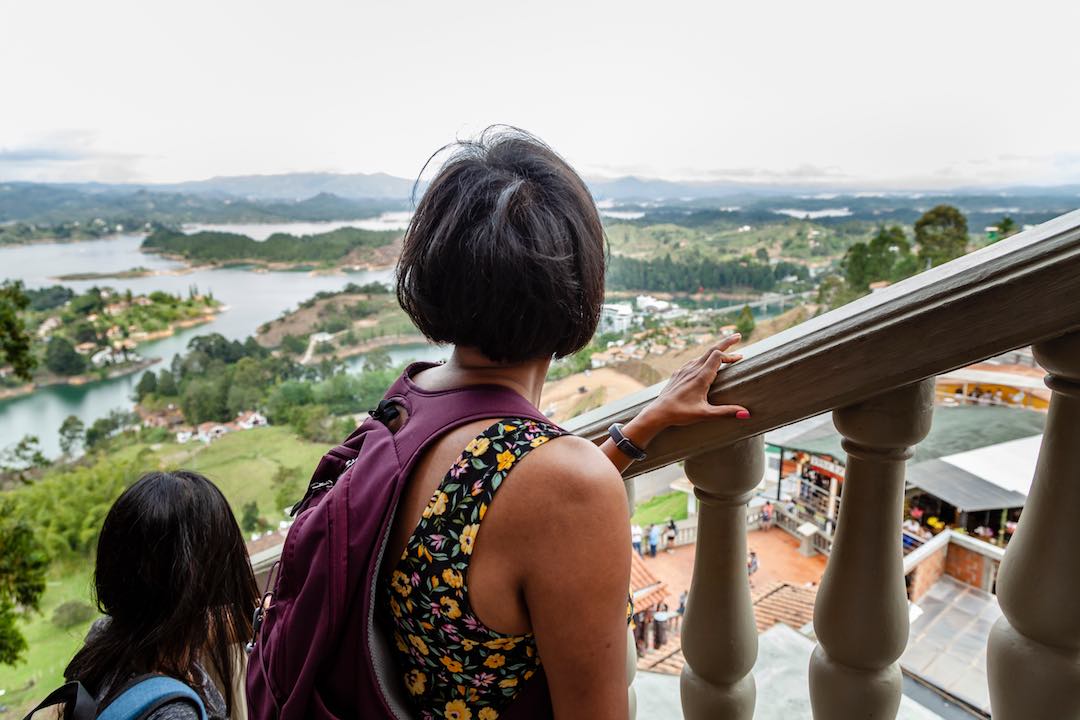 The Absolute Best Hike in Colombia

This multi-day trek is Colombia’s Machu Picchu and hands down the best hike in Colombia. Tucked away in the Sierra Nevada mountain range a city built by the Tairona people nearly 800 years BEFORE the Inca’s built Machu Picchu, was slowly lost to the hands of time. The jungle methodically swallowing its settlements, bridges, and drainage systems. Hiding an entire civilization for centuries.

Then in 1972, a group of explorers looking for exotic birds deep in the mountains stumbled upon some moss-covered stone steps. For the next 3 years, tomb raiders pillaged the once lost city of most of its gold and ancient artifacts. In 1975, the Colombian government stepped in and began to restore the now protected city.

Today with the assistance of a local guide curious (physically fit) travelers can trek to this remarkable city. You’ll traverse gushing rivers, climb 1,200 slippery stone steps, and battle the region’s humidity. This will be a difficult climb. Likely the most difficult you’ll attempt in Colombia. This is not an adventure for the casual tourist or the luxury traveler. It will require 4-6 days of hiking over more than 50 km of twisting trails, camping in indigenous communities and rising with the sun to start again. And the return trip? Exactly back the way you came. Take extra care not to take a tumble down the stone steps you summited days before.

But if lush jungles and scenery untouched by tourism are your prerogative it doesn’t get better than this.

There are 5 tour companies authorized to guide you on your journey. Other tour companies do offer treks but you’ll also be accompanied by a guide from one of these 5 agencies.

All tour operators agreed upon a set price of $348 USD. There is no need to book far in advance.

The difference between the 4 and 6-day trek is only in difficulty level. The longer the trek the slower the pace and easier the hike.

The trek is made considerably more challenging by torrential downpours during the rainy season which in these mountains is from May-September. If you’re concerned about your hiking ability consider attempting the climb only in the dry season. 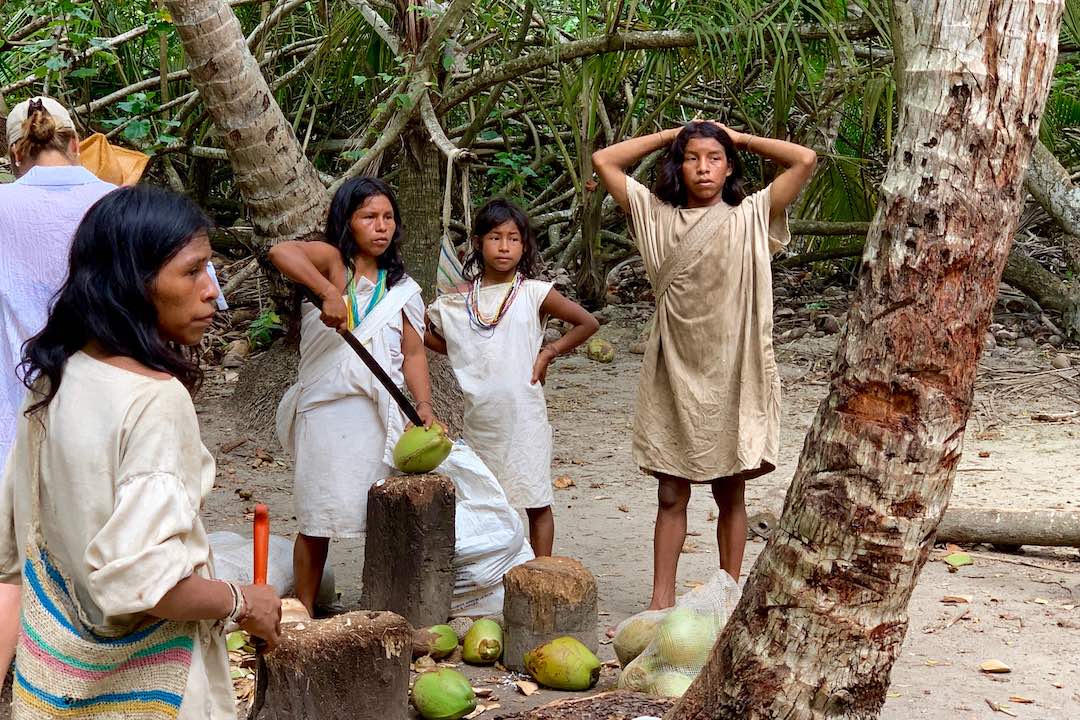 A Worthy Alternative (to Best Hikes in Colombia)

If you’ve begun planning your trip to Colombia, we’re sure its reputation precedes it. Parque Tayrona is easily one of the best hikes in Colombia.

Untamed coconut palms line the turquoise shores of Colombia’s most idyllic beach. You can easily spend several days hiking the sandy trails of Parque Tayrona and lounging in hammocks near its coastal lagoons. This protected park at the base of the Sierra Nevada mountain range is one of the most heavily touristed regions along the Caribbean coast. Be aware that the park is closed multiple times per year to allow the ecosystem to recover following peak tourist season (best to check the official website for dates). But the hype is well-deserved. The views of Colombia’s coastline are unrivaled and the biodiverse jungle here contains some of the best wildlife spotting within the country.

There are two hikes you absolutely cannot miss within the park. 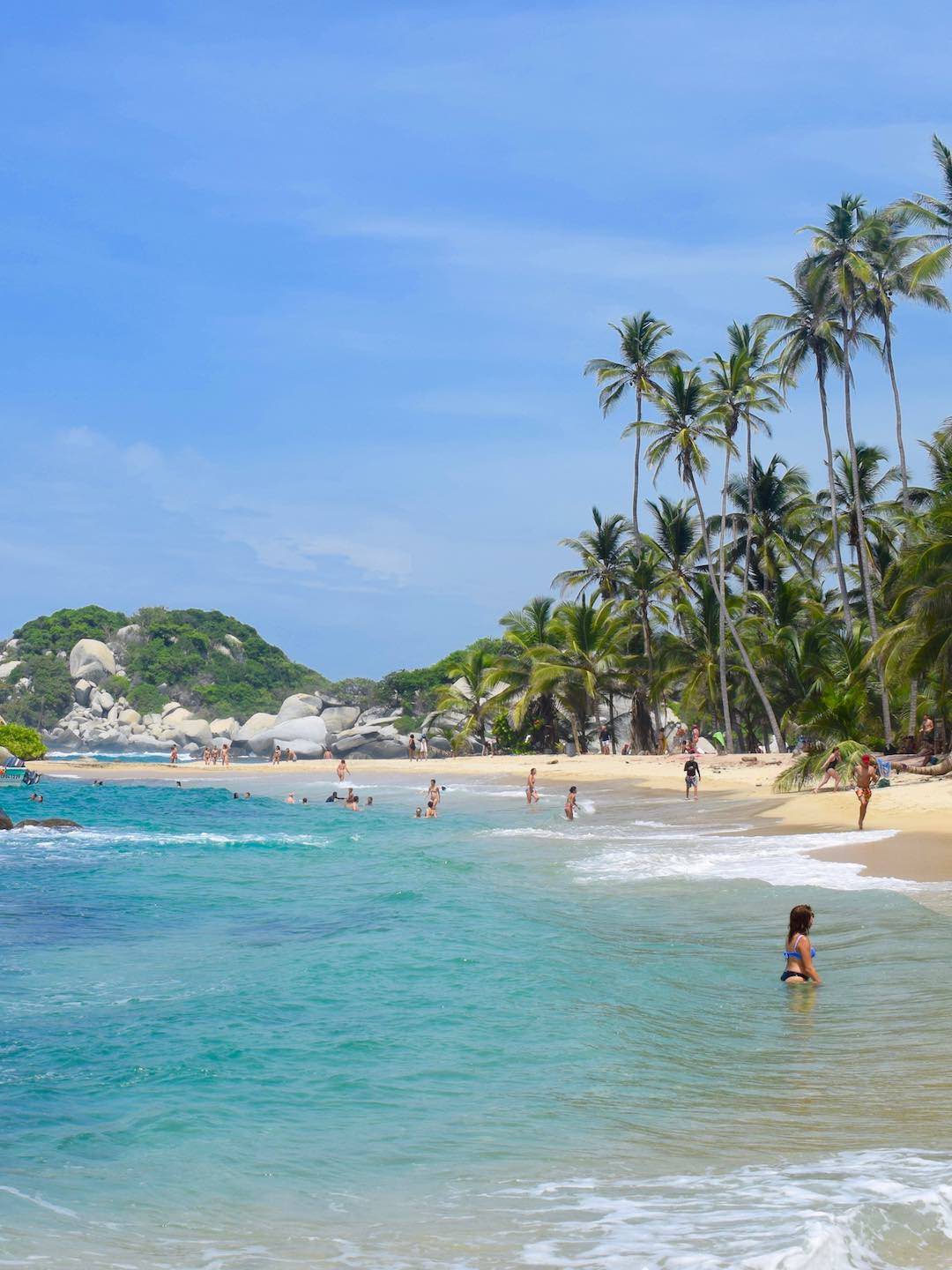 An easy hike along stunning stretches of golden sand and all the iconic Tayrona viewpoints. This is the busy region of the park, so don’t expect to get the shores to yourself. Consider visiting during low season. Visitors gravitate toward weekends and peak season during December/January.

Trail Length: 6 km (Not including entrance hike into the park)

Shimmy across boulders and traverse the inner jungle trails of Tayrona on your way to the coastline. The Pueblito ruins deep within the center of the park lay as a tribute to the strong indigenous presence that still exists in this region of Colombia. 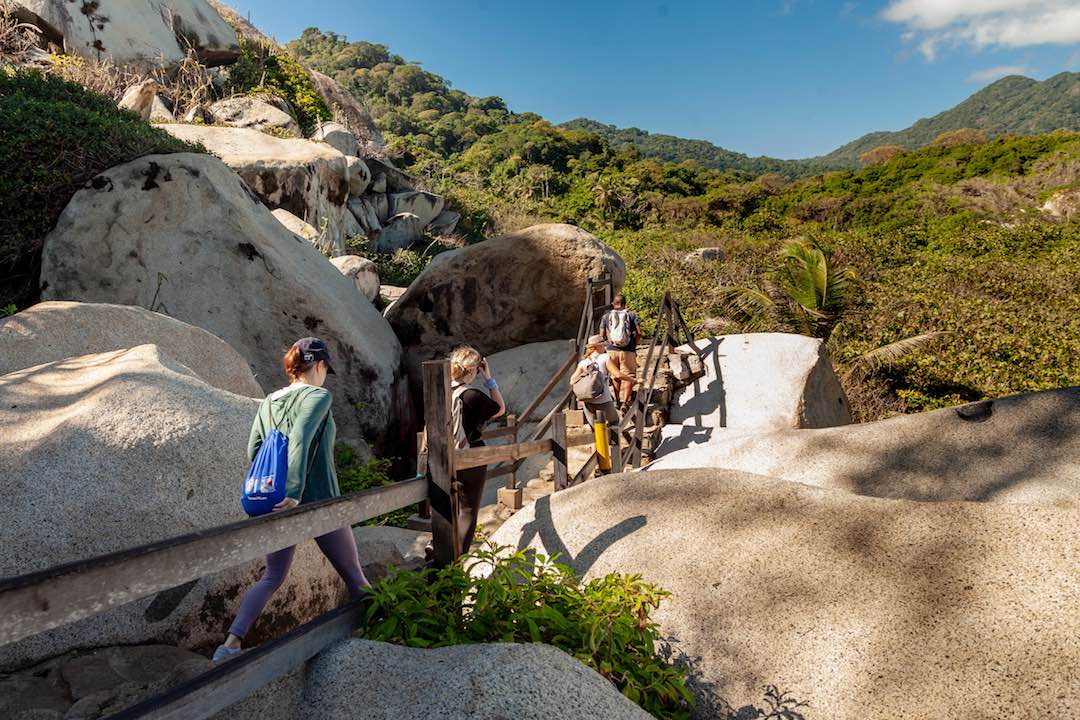 Here’s a list of some of the best hikes in Colombia (shorter hikes).

Soaring high above the colorful pueblo of Guatape this behemoth rock formation towers over the red clay earth and turquoise lakes below. 740 steps lead you to the summit. Not for the die-hard hikers as the “trail” consists of stone stairs twisting around the giant rock but the views…spectacular. 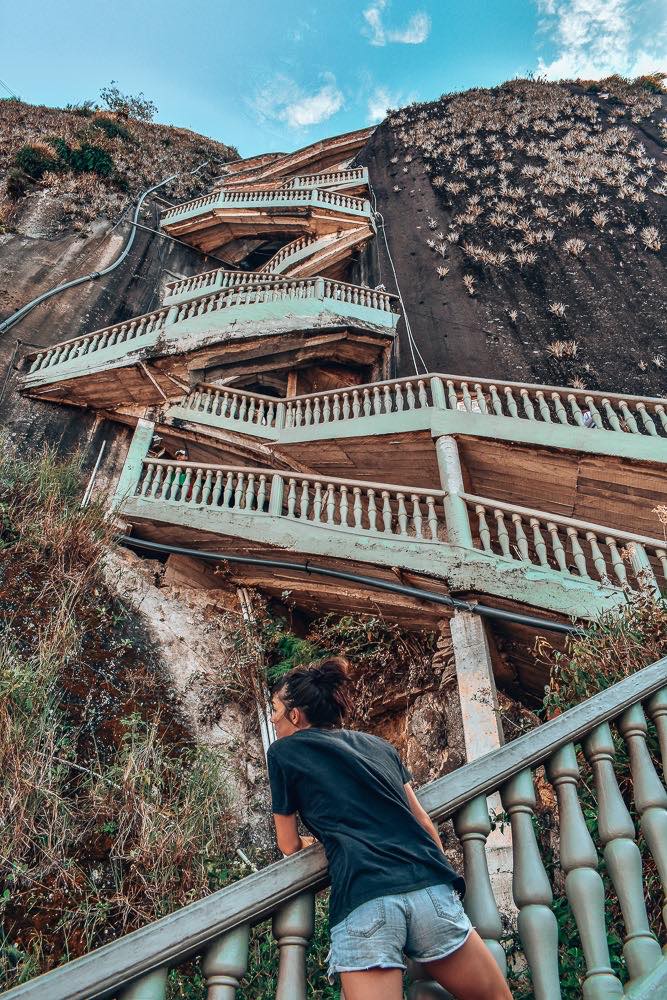 Visit the river during the rainy season and you’ll come across vibrant yellow, red, pink and purple algae flowing across the surface of the water. This gives the illusion that the water is multi-colored. A short and sweet hike that resolves with a dip in the colorful stream. You must be accompanied by a guide during your time here.

Towering wax palms break through the cloud forest perched on rolling green hills. Misty and damp, this region of Colombia is famous for its world-renowned coffee beans. But the trails through the valley were the highlight of my stay in Salento.

Arrive early and hike the loop counterclockwise. This route has less downhill hiking which is rough on the knees and also provides the best opportunity for fog-free views of the palms by mid-afternoon.

Did you know that the Wax Palm is Colombia’s national tree? It grows to heights of 60 meters. 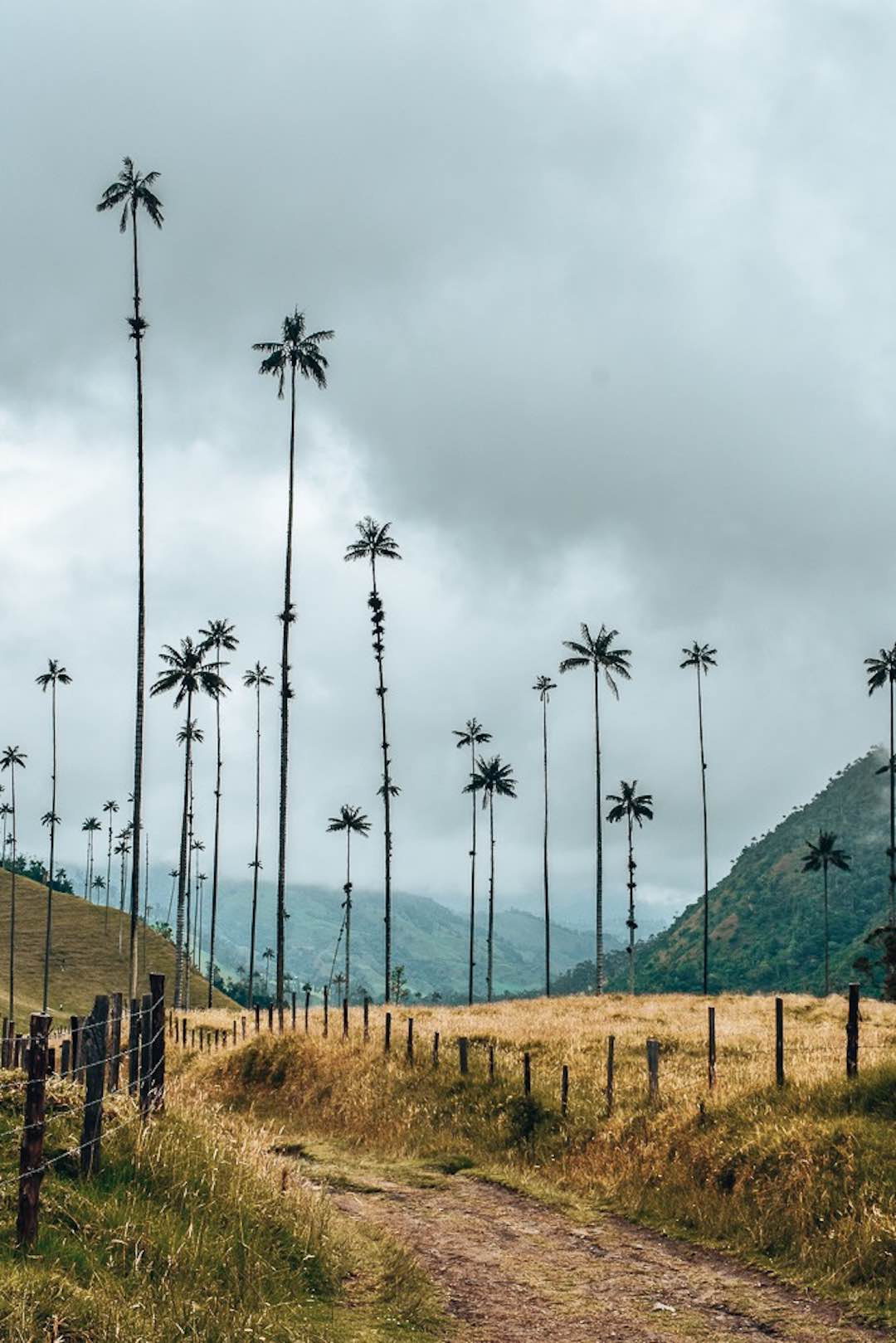 At nearly 2,000 ft tall this is Colombia’s tallest falls. Sitting just outside Bogota this rocky slippery slope will take you past several much smaller waterfalls and treat you to views of the green mountains around you. Be prepared to get soaked from the spray.

Trail Length: 16 km round trip from the nearest town. Much shorter from the trailhead.

Beginning in the cobblestone streets of Barichara and stretching all the way to the smaller town of Guane, this scenic path near San Gil is a lovely walk. Enjoy pristine streets, sleepy Colombian towns with white-washed walls, and some peace and quiet in the countryside.

Visit the end of the world in Mocoa. Another waterfall trek that will take you across bridges into the deep recesses of the jungle. Smaller scenic falls and swimming holes line the trail. Surrounded by vibrant flora you’ll arrive at the summit of the 70 m falls. Sliding carefully across the pool of water on your stomach you’ll be able to look down on panoramic views of the jungle below and watch the water cascade down far beneath your feet.

Here’s a list of some of the best hikes in Colombia (longer hikes).

A deep dusky caldera 4,580 m. high. Furry cows, succulent-type plants, and a climb shrouded in a damp fog brings you through the unique landscape of Paramo. Prepare for added difficulties due to loose volcanic sand as you reach the top and cool temperatures due to the elevation. An off-the-beaten-path solitary hike for the intrepid.

Consider exploring the 15 km of trails surrounding the volcano weaving through the scenic valley. A much easier hike.

In the lesser-visited pueblo of Jardin, a magnificent cave resides. A hole in the ceiling of the cave reveals a cascading river beautifully viewed from below. A waterfall within a cave collecting in an icy pool on the floor. The trek itself is long, slippery, and requires some dexterous maneuvering down steep mountain trails.

Trail Length: 16 km (You can also opt to do a portion of the trail on horseback.) 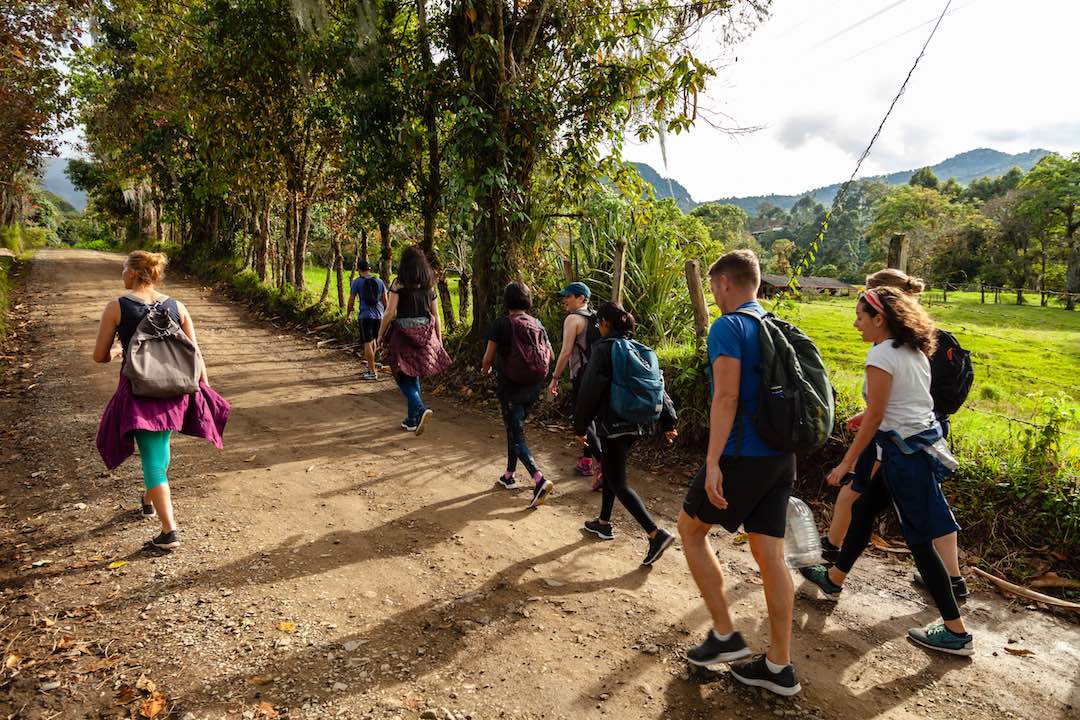 Summiting the snow-capped volcano is made extra challenging due to the 16,000 ft of altitude and freezing temperatures. You will require climbing equipment to reach the peak but for those just interested in scenic trails the alpine lakes and panoramic views of the surrounding region are worthwhile. Make sure to be aware of recent volcanic activity in the area as some trails are subject to close. 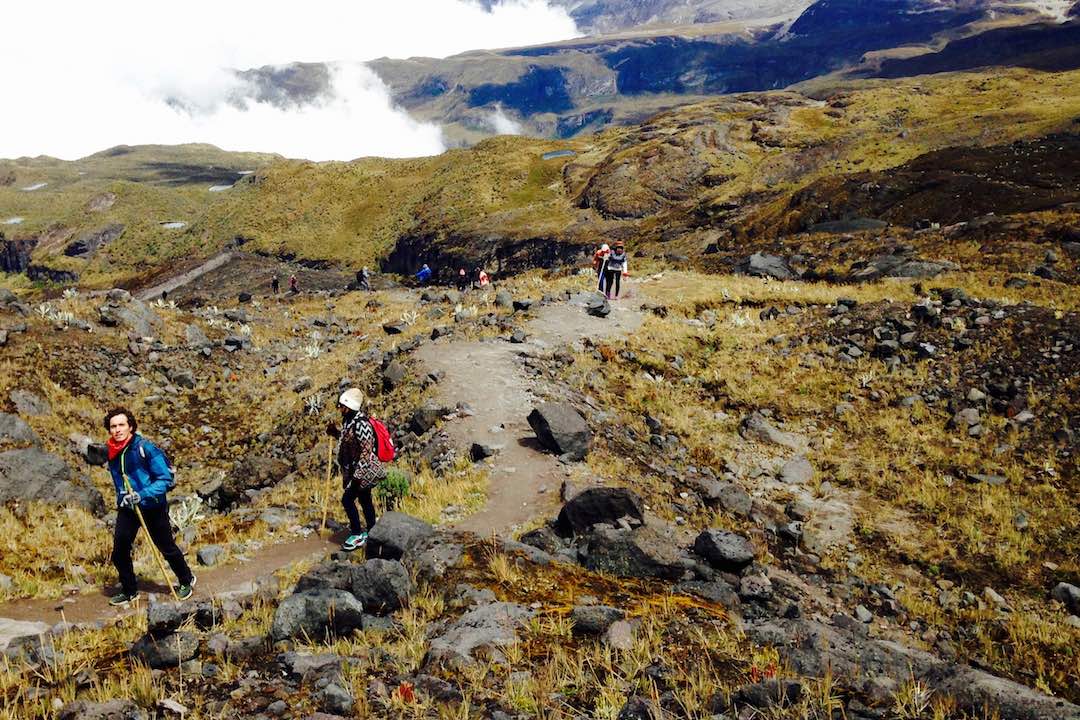 Glaciers and snow-capped mountains in Colombia? Here they exist. A truly unique landscape soaring up to 17,000 ft peaks. Laguna Grande is one of the three approved hiking trails within the park and by far the most scenic. Following 4,000 m of elevation gain (watch out for altitude sickness) through ever-changing terrain you’ll be greeted by a crystal blue lake at the summit. A guide and hiking permit is required.

5. TREK THE AMAZON RAINFOREST IN LETICIA

Leticia is the gateway to the Colombian portion of the Amazon rainforest. Pressed up to the coffee-colored banks of the Amazon river you can explore the muddy trails of the worlds final unexplored frontier. Accompanied by a guide you can immerse yourself in the wild untamed jungle with unrivaled flora and fauna.

Trail Length: The options are limitless.

With the most remote corners of Colombia now open and safe for exploring there is no better time to grab your backpack, water filter, hiking boots and go hiking in Colombia. Explore with a group or carve your own way across Colombia’s diverse landscapes.

Explore Colombia With Other Travellers Aged 25-45

We’re Other Way Round and we bring together groups of adventurous travellers aged 25-45 for an immersive & authentic experience of travelling Colombia. Here’s some of our most popular Colombia trips. 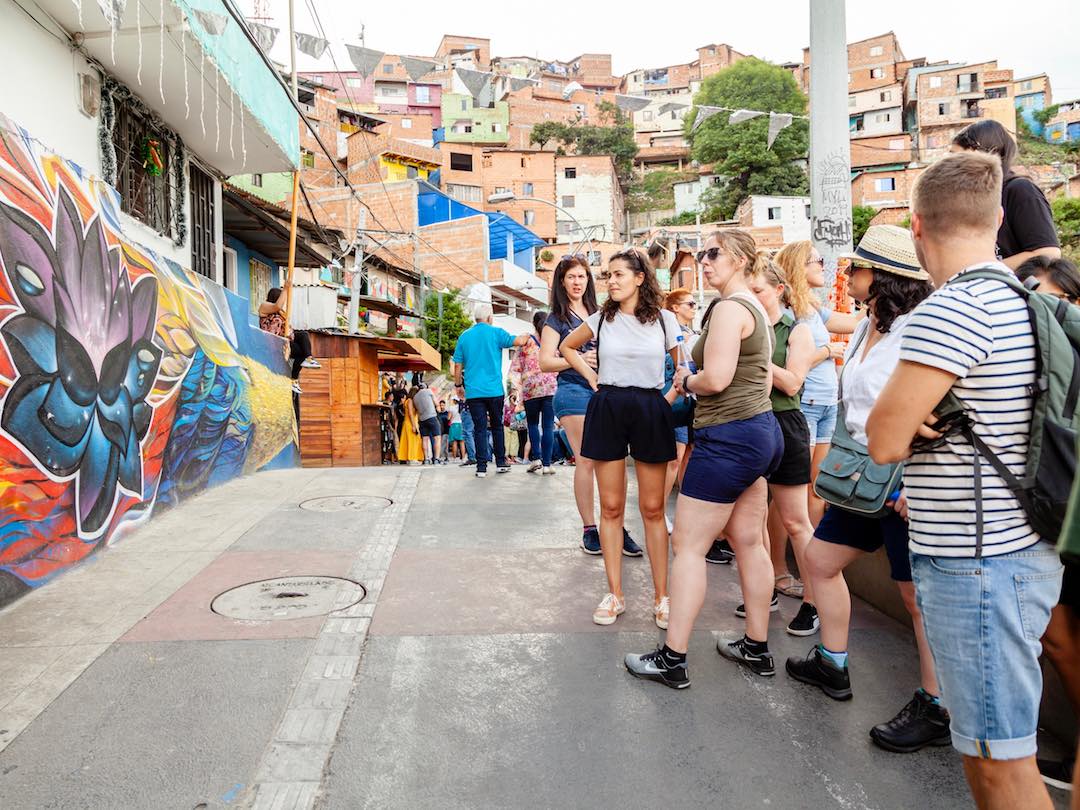 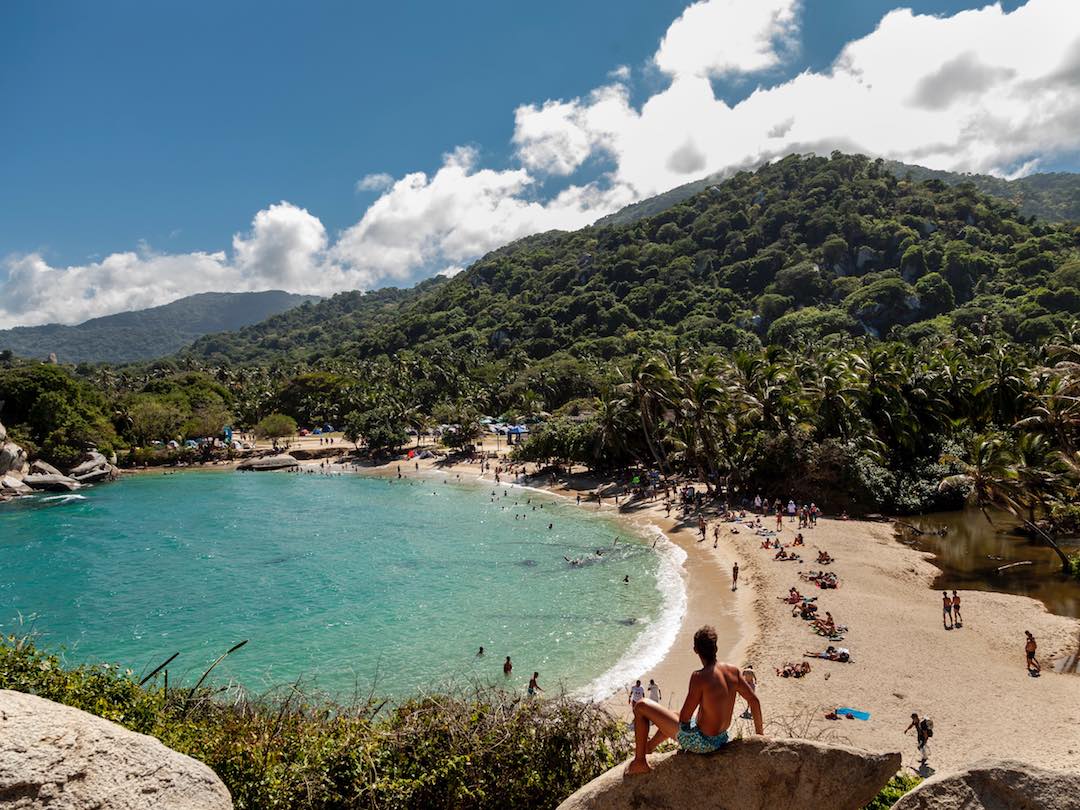 15 Days covering the very best that Colombia has to offer. See Itinerary 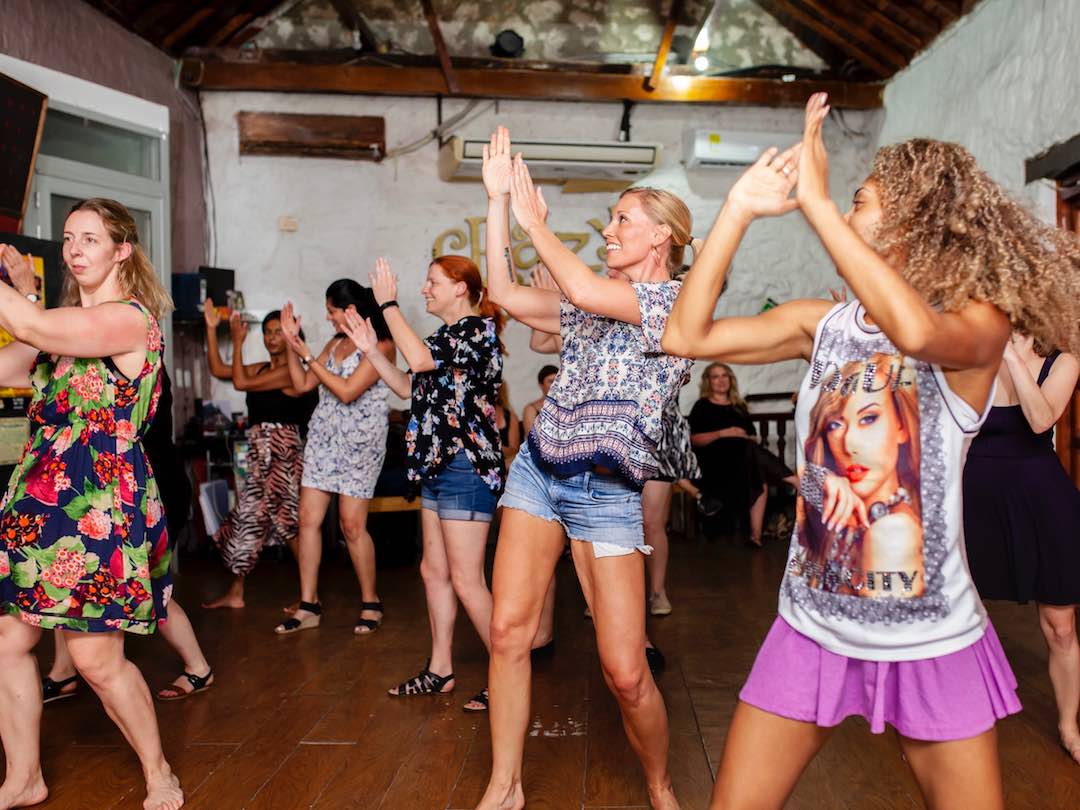 By continuing to browse this site you are agreeing to our use of cookies.